..the forum for all Fergie owners, and friends.

Put you photos of your Fergie here for all to see..
Post Reply
60 posts

G,day Hiawatha,
Where did you get the ferguson badges on the side of the bonnet? They look the same as the ones that were fitted to the tef
Cheers ....gunner

The bonnet is a replacement , the original was wrecked when the tractor's brake slipped and it rolled into a gully . I bought it from the tractor breaking yard that so many unusual and hard to find parts have been sourced over the last few years . One of the badges is the original that came with it , the other I bought on E Bay , I cleaned them and them hand painted the infill duck egg blue .
There are a number of reproductions on the market , some are simple silk screened self adhesive aluminium , some are cast alloy , I don't think anyone makes the copper plate / chrome, pressed steel original versions .
-------- 1952 TED, 1957 FE35 Grey and Gold Deluxe
Top

Heheh...that Michael Douglas film from '93 looks somewhat amusing and I feeeeel his pain.

Did recognise Strangelove though.....was he not partly based on Kissinger?

Brilliantly revisited in "The Rocky Horror Picture Show" and indeed The Rocky Horror Show before it....Dr Emmett Brown.
Mind you, if it wasn't for Kissinger there's a high probability none of us would be here now. Nixon was pissed one night during a tense period with North Korea, and told the guys to launch nukes, allegedly.

He then crawled off to bed, and Kissinger told the Pentagon to wait till he was sober in the morning...

By the way...I swapped out that right 'Wing' yesterday so will pack & weigh etc. I must have a slightly bent panel on my bonnet as this one sticks out the same at the back....but at least it's a pair again.
Top

There is a common misconception that the character was based on Henry Kissinger, but Kubrick and Sellers denied this; Sellers said, "Strangelove was never modeled after Kissinger—that's a popular misconception. It was always Wernher Von Braun."

I might have to consider renaming the Grey and Gold ones ,' Fat Man' and 'Little Boy' spring to mind .

I think I recall Sellers mentioning Werner von Braun now you mention it.
It's just that he looked not unlike Kissinger, who was also a major Presidential advisor....more so than WVB ever was, I think.
Top

I have had this for a few years now , 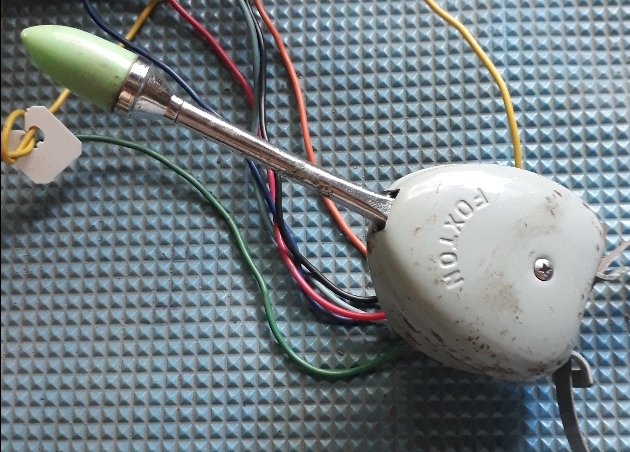 It is a Foxton indicator stalk made as an aftermarket addition in the 1950s to bring cars of the day up to new safety regulations .
They were commonly used in FJ Holdens and series 1 Landrovers , I thought it would suit my TED very well .
The wiring is bewildering but fortunately I found a diagram on the net.
I want to fit it and a vintage horn to the TED sometime soon , signals just might make traveling on roads a little safer.
-------- 1952 TED, 1957 FE35 Grey and Gold Deluxe
Top

Super post Hiawatha it a a good read I especially like what you did with your radiator I will probably have to do something like that with mine as its in a bit of a state.. Nice tractor.